Hello, friends…it is time for another profile in the series. Today I am pleased to present to you as the #twelve, Cheri Valle.

As a teenager, I wanted to fit in, to be like everyone else.  But I wasn’t.  I couldn’t run around the football field.  I was dismal at sports.  I couldn’t get myself over the vaulting horse in gymnastics.  My parents took me to an orthopedic doctor who basically said there was nothing wrong. Boy was I glad when those high school years were done!  And I kept trying to fit in.  I learned to ski, and went on ski trips with my coworkers – and spent my entire skiing career on the green slopes, never graduating to anything tougher.  I rode my bicycle until I got so tired of falling off that I quit doing it.  And kept pretending that I was like everyone else….

By my early 30’s I was a couch potato.  And I convinced myself it didn’t matter. I had my career, my children, a house I was rehabbing.  I was busy, I was happy.  But by my early 40’s it was clear there was SOMETHING really wrong, but what?  My neurologist called it lots of things, finally settling on “atypical MS”. Then at age 50 – after a couple of years of working on and off again – I collapsed and ended up in the hospital for 3 weeks.  My sister visited me, and the neurologist grabbed her and did a neuro exam out in the hall.  He came into my room and said, “I know what it is.  It’s genetic.  It’s Spinocerebellar Ataxia.”  I had the genetic testing, such as it was at that time more than 15 years ago, but no particular SCA type popped up.  The neurologist said that it didn’t matter; more than 50% of the people with SCA were of an unknown type.  So that’s me, SCA – unknown type.  Finally, at age 50, I had a name to put on this thing that, in my eyes at the time, had pretty much ruined my life.

I never went back to work after that hospitalization.  After 30 years of working at senior levels in high tech, I felt like I had lost my identity.  For a while, it didn’t matter all that much since I could barely get out of bed.  Then finally I began being able to rejoin the world, a little.  I got my first wheelchair – freedom!!! I could go to the grocery store without being afraid I would get to the back of the store then be unable to return to the front under my own power.  I discovered, rather by accident, that I am less sick in a less humid environment, so I packed up and moved to the very rural high desert community in southwestern Colorado where I live now.  And began trying to discover who I am, if I’m not a high tech person.

It’s an interesting question.  Who am I?  I am a person who spends most of her time literally in bed – the only place I am really comfortable is in my super fancy adjustable bed with the super fancy mattress pads.  But when I’m talking to someone on the phone, they don’t have to know the person on the other end of the phone line is propped up with the back of the bed at a 45-degree angle, in her PJ’s, with a cat or three on her legs.  I sound just like anyone else, as long as no one sees me.  Most of my online friends don’t even know about my power chair – the one with every bell and whistle you can possibly get on a power chair, that elevates and reclines and does every other cute wheelchair trick.

I won’t claim it has been all that easy.  Going from being the person in charge to the person forced into retirement at age 50.  Going from the person who built room additions to the person who can’t stand on a ladder.  I have a cat named Junie, who only has two and a half legs – in the rear, she has a short stump on one side and no leg at all on the other.  But she doesn’t seem to care. She doesn’t compare herself to other cats, or get depressed, or see herself as limited.  In fact, she’s the cat in charge of my household – she whacks the other cats to keep them in line.  She accepts her body totally and just deals with what is.  I try very hard to learn from Junie and accept that this is me, and I just have to deal with it.

And I have found my place and discovered who I am.  I am president of our local all-volunteer humane society.  When pet owners are faced with expensive vet bills they just can’t cover, I help them track down funding. I write Facebook posts to raise money, or to find a new home for a dog or cat who has nowhere to go.  Every once in a while, I get to bottle-feed some puppies or kittens, though mostly I leave the hands-on stuff to others.  Most days, from the time I wake up in the morning until I decide to quit for the day, I’m either on the phone or on my computer, doing something related to helping animals.  I’m literally known around the country as a cat expert on some really obscure topics (if your cat ever develops an esophageal stricture, I’m the person to contact).  I went to Walmart earlier today, and someone stopped me and said, “You’re with the humane society, aren’t you?”  I have no clue how she knew that.  Yup, that’s me – the crazy cat lady charging around town in the bright red power wheelchair.

It’s kind of interesting, how that happened.  16 years into my retirement, I’ve found the “job” I probably should have been doing all along.  I’m having way more fun now than I ever did while working for a living. All because of SCA. There really is a silver lining…. 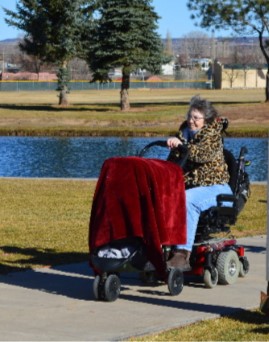 Thank you. Cheri. Thank you for your work at the Humane Society…and the reminder that we often need to here…that some good can come from a handicap. It depends largely on your outlook and attitude. I needed to read that…because sometimes I feel myself getting drawn into a self-focus mode that only sees what I have lost….seeing only my current limitations. But then, I count my blessings and re-focus on the possibilities before me.

Well, that’s another profile. Until next time, my friends…Jason